I-M26 is the well known haplogroup is found in Sardinia and throughout the most western parts of Europe. Probably more than 75% of I-M26 men belong to the I-L160 branch. The L160 SNP was discovered in 2009 thanks to a Walk Through the Y test done by I-P37 project member Wil Husted, now deceased. L160 was the first major SNP below I-M26 to be discovered.

Paolo Francalacci's lab sequenced the genomes of approximately 1200 men in Sardinia and 464 belong to I-M26.These men belonged to several very distinct branches as shown in his paper published in Nature in 2013, some were L160- and others L160+. But the largest group of I-M26 men in Sardinia belong to the M26+ L160+ PF4088+ PF4189+ PF4190+ branch. The Genographic 2.0 test (original version) contained many PF series SNPs (named for Paolo Francalacci) that are found in I-PF4190. But for some reason, the Geno 2.0  test (original version) included very few PF SNPs from other branches of I-M26.

Thanks to all of this, we learned a great deal about the distribution of many branches of I-M26. Because so much was already known, there wasn't an initial rush of orders of the Big Y test. But now several men in I-L160 have completed the Big Y and we have found many new branches as shown on this tree. Click here to download a pdf version.

Current testing recommendations and links to order SNPs at YSeq.net

Here is a list with links to order important SNPs in some branches of I-P37 (and information about STR testing). I will update this as time permits.  I don't intend to include all SNPs, only the newest and most important SNPs. We receive no commission etc from YSeq or FTDNA, this list is for information purposes only. [updated September 2017]

Read more »
Posted by Bernie Cullen at 11:59 AM No comments:

The Dinaric-South cluster is defined by the SNP PH908

A SNP which defines the Dinaric-South cluster has been identified. It is PH908 (position 14107064 C to T). It is inside a region which is not well covered by the Big Y test. Some Big Ys report 1-5 reads for 14107064 but because of the low number of reads this is not reported on FTDNA's Big Y pages and can only be seen with a YFull.com analysis or similar.

PH908 can be tested very reliably by traditional methods and it is available for order at YSeq.net ($17.50 plus a one-time DNA kit fee of $5 for your first test at YSeq):
https://www.yseq.net/product_info.php?products_id=32650

(Note: in many cases it is not necessary to order PH908, please contact Bernie or Zdenko with any questions.)

These results confirm the placement of PH908 as shown in our colored I-L621 tree posted in this blog in August 2016 .

PH908 is not available for individual order at FTDNA but we will ask them to add it to their catalog and/or a SNP pack. PH908 is not yet part of the I2a-M423 SNP panel at YSeq but it can be ordered as an individual SNP at YSeq. As a reminder, YSeq results cannot be transferred to FTDNA.

Posted by Bernie Cullen at 11:28 AM No comments:

Click here to see our latest draft tree for I-L621.  We have used colors to show STR marker clusters. For example, the branches belonging to Dinaric-South cluster (DYS448=19, DYS449=30 or similar, and DYS565=9) are colored blue.

We also show the many Dinaric-North branches, the Disles branches, and two small clusters within Dinaic-North: a Jewish cluster, and a Mediterranean cluster. All of these clusters can be easily identified by STR marker values.

This colorized tree is not attempting to show a geographic or ethnic/historical origin for every branch. We are only showing STR clusters. For example, there are no known STR marker values specific to the I-Y4460 branch, therefore I-Y4460 is shown as part of the bigger Dinaric-North STR cluster.

UPDATE 29 August 2016--You will notice that the tree shows that the Dinaric-South group belongs to the I-PH908 branch. PH908 is a SNP that was first reported in the Pille Hallast survey in 2014. This SNP is not covered by the Big Y test and most those who have Big Y test result have no call status for PH908. Some have one or two positive or negative reads. Two persons from DinS cluster (I-S17250* and I-Z16983 haplogroups) have positive T+ results in their YFull reports. Three persons  who have S17250+ and BY128+ results have negative C- results. Two persons from I-Y4460 and I-Z17855 haplogroups also have negative results. The position of this SNP relative to Y4882 is to be investigated.  PH908 could be a characteristic SNP for the Dinaric South cluster. The PH908 test is available at YSeq.net and we recommend it for all Dinaric-South men. Two Din-S men have already reported PH908+ results from YSeq. https://www.yseq.net/product_info.php?products_id=32650

Below is a thumbnail of the draft tree but you will need to click at the link at the top of the post to see or download a high resolution tree. 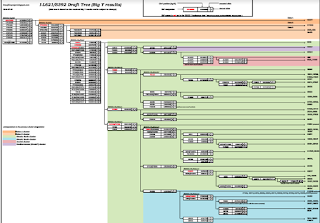 Click here for the latest tree for I-L161 "Isles".

--sample 306862 belongs to the Isles-D3 (also called Isles-D99). He is the only person in Isles-D3/D99 to have done Big Y or similar testing. But we have learned that he shares two SNPs with five anonymous samples who did the Chromo2 test at britainsdna.com So we are now able to label his S7714+ S7708+ branch as I-S7714.

You can see that there was a very rapid expansion in the Isles-C and Isles-D groups: the ancestor of all of Isles-C and Isles-D was Y3734+ and the long list of SNPs equivalent to Y3734 represents thousands of years where there was no permanent increase in the Y3734+ population, and then almost simultaneously it split into at least four lines, all of which have survived to the present day. There are very likely some other surviving lines that diverged from the others at the sample time but no Big Ys have been completed for these lines yet (these lines are the part of Ken Nordtvedt's Isles-D1 group that doesn't fall into one of the branches already on the tree).

There are also some updates to the I-PF4135 section at the bottom of the tree (Isles-A)
Posted by Bernie Cullen at 3:46 PM No comments:

Posted by Bernie Cullen at 10:19 AM No comments:


Posted by Bernie Cullen at 8:45 AM No comments:

For many years I posted about the I-P37 haplogroup on my other blog, cullengene.blogspot.com  But eventually I started this blog and copied all the haplogroup-related posts here. At some point, all the old jpgs/image files disappeared from this blog, I don't know why.

Recently I found this site which archived the old posts from the Cullen blog:
http://cullen212.rssing.com/chan-23512892/all_p1.html

When I have time, I will try to transfer the I-P37 haplogroup tree drawings etc to this I2a blog.

(Update: I think the images disappearing has something to do with me getting an Android phone, and somehow I moved the files around)
Posted by Bernie Cullen at 12:38 PM No comments: 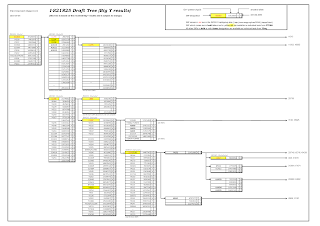 If you can't see the tree above easily, click here to download a pdf version of the tree.
Posted by Bernie Cullen at 8:49 PM 2 comments:

There has been a lot of progress and I think all known I-L161 people fit into one of the major branches shown here, and in most cases we can predict a very specific branch for someone based on 67 STR markers.

Here are some comments starting at the top of the tree:
The I-Y13338 branch has very few known members, they were formerly called the Isles-B2b cluster. The I-Y13338* branch at very top is a closely related group from Thrace (the European part of Turkey and adjacent area of Bulgaria), and the I-Y13330 branch contains two members of a Polish family. Based on distinctive STR markers I think a family from southern Iraq, a family from central Germany, and a family from Cuba also belong to I-Y13338 and they all seem to be closer to the Polish family than to the Thracian group.

The I-S2742 group contains more branches that were formerly called Isles-B: for example, the Isles-B4 group which is very rare and from southern England and has the very distinctive marker value DYS388=11. I-S2742 also includes the Isles-B1 group which is all closely related to each other, maybe they are all Americans with English ancestry? And I-S2742 also includes a few additional English-origin families who don't belong to B1 or B4, as well as some German families who haven't done Big Y and haven't fully tested the known SNPs.

The I-FGC7169 group contains all of Ken Nordvedt's Isles-C and Isles-D clusters which are almost completely Irish and British with a few Canadians with ancestry from France. It turns out that Isles-C1, Isles-C2, and Isles-D2 are all related to each other and comprise the I-FGC7184 branch (although Isles-C1 is more complex and doesn't form a single branch. Isles-C2 and Isles-D2 are each single, well-defined branches). But Isles-D1 turns out to be very complicated and not closely related to Isles-D2. There are several small branches that were formerly called Isles-D1: Isles-D3/D99 represented by kit 306862, the "Todd cluster" represented by kits 192579 and 432883,  and kit 164613 is in his own branch at present.

The I-A1150 branch contains more Isles-B people: Isles-B5 which doesn't have very distinctive STR markers, and Isles-B3 which has the distinctive DYS392=12 value, and a few people who don't belong to either of these groups. All known members of I-A1150 are from Britain or Ireland (most are from England).

The branch shown with the novel variant 2720236 A to G  (now called A10028) and 19 additional novel variants is represented by only two known men, one from Scotland and one from Ireland

The I-PF4135 branch is the Isles-A branch, mostly from Britain and also Ireland. Most of the subbranches shown are based on Big Ys for the Munro family, and if more families do Big Ys we will learn much more. There is a single man, kit 23143 who has received PF4135- results and his STR markers are slightly different from the PF4135- men, but I'm sure he shares most of the other novel variants/SNPs listed as equivalent to PF4135.
Posted by Bernie Cullen at 9:02 AM 3 comments: