Evidence for a small "Out of Sardinia" migration?

Around 40% of men living on the island of Sardinia belong to the I-M26 haplogroup, which is much less common in other places. Paolo Francalacci sequenced the Y chromosomes of hundreds of Sardinian men of all haplogroups, and found thousands of new SNPs, and arranged the men into a tree. Unfortunately I haven't been able to find a version of his tree that shows all the SNPs on each branch, but I think it is clear that all the I-M26 men living in his study belong to the more specific I-PF4189 branch. 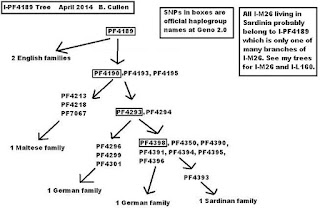 The designers of the Genographic 2.0 test did have access to Dr. Francalacci's discoveries, and they included many of his PF series SNPs. I know of over 50 I-M26 men who have taken the Geno 2.0 test, and 45+ of them belong to other branches, not to I-PF4189 (and these 45+ men have paternal ancestry from Spain, the Azores, France, mainland Italy, Germany, Switzerland, Britain, Ireland, Belgium).

But six men do belong to I-PF4189 and they have ancestry from Sardinia and Malta, but also from Germany and England. See the attached tree--the two German men belong to different branches of I-PF4189, and they share several downstream SNPs with the Sardinian men from Francalacci's study, and one shares many SNPs with a Sardinian-American man in the FTDNA I2a Project.

I don't think this is recent (last 500 year) migration from Sardinia or because of adoptions etc. in Germany or America, one of the German men has STR marker similarities to other Germans who have not yet done the Geno 2.0 test indicating a long presence in Germany.

Was this an out of Sardinia migration? Or did the Sardinians and Germans both come from a founding population on the mainland of Europe?


Posted by Bernie Cullen at 8:54 AM No comments: