For several years YSeq.net has offered a very good I2a-M423 panel which covers almost every important SNP for I-L621, I-CTS10228 Dinaric, Disles, and I-L161 Isles. Today YSeq introduced a SNP panel that is for the I-M26 "Sardinian" branch, the I-L233 "Western" branch and the smaller branches like Alpine, Northern France, France etc. Here is the link: https://www.yseq.net/product_info.php?products_id=51639 Of course, many members of the I-P37 project have already done Big Y tests, or extensive SNP testing and you don't need any new tests. But I recommend this SNP panel for many people in I-M26 "Sardinian" and I-L233 "Western". It's much more complete than the I2-P37 SNP pack at FTDNA. It's also cheaper ($88) but you will need to give a new cheek scrape DNA sample (there is a $5 kit fee) and you will not be able to add your YSeq results to your FTDNA page.

I can also recommend this test to I-P37 men who have done tests at other companies and don't wish to order tests at FTDNA for whatever reason.

Please email berniecullen@gmail.com or ask for specific advice here
Posted by Bernie Cullen at 11:42 AM No comments:

There are several interesting additions:

--Disles-A: Almost all I-L621 men are CTS10936+. There are a few families that are L621+ CTS10936-, and we call this branch Disles-A. The D means that it is very distantly related to the Dinaric branch, and the isles means that this branch is typical of the British Isles. We now have a second Big Y result for Disles-A, and we can now call this branch I-A17060

--Disles-B: we have discovered a man who is CTS10936+ but CTS4002- and these SNPs (and several others) are no longer equivalent. The man had only 37 STR markers, and we predicted that he belonged to the I-CTS10228 "Dinaric-North" group, but this prediction was incorrect.  He is an American with paternal ancestry from southwestern Germany. With 67 markers it's very easy to distinguish Dinaric (L621+ CTS10228+) from Disles (L621+ CTS10228-) because Dinaric has the very distinctive value DYS565=9

-Disles-B:  thanks to a new Big Y, we now have 17 SNPs which define the I-A16633 branch. I think most of the Disles men from Britain and Ireland will belong to this branch, but some of them may not share all of the 17 SNPs. The I-FGC20473 branch is much smaller

--I-CTS10228*: There are four known branches of the I-CTS10228 Dinaric branch, and for many years there was only one known man who was CTS10228+ but who didn't belong to any of the branches, this man has paternal ancestry from southeastern Poland. Now there is a second CTS10228+ A2512- Y4460- Z17855- S17250-, this man has paternal ancestry from Alsace (southwestern Germany/France border area, now part of France). The Polish-ancestry and Alsatian-ancestry man don't share any unique novel variants/SNPs. There are many SNPs listed as equivalent to CTS10228, and it's possible that the Alsatian-ancestry man is ancestral (negative) for some of these, he has submitted his BAM file to YFull and we will learn the answer soon. Like all other I-CTS10228 men, the Alsatian-ancestry man has the distinctive marker value DYS565=9

I expect that a new Big Y will be completed very soon. We already know the man tested belongs I-A8462, and maybe he will belong to the I-A16520 branch. There are two other interesting Big Ys for I-L233 that were ordered recently. 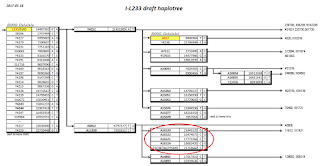 Posted by Bernie Cullen at 12:09 PM No comments: