For several years Ken Nordtvedt has been sorting Y-DNA haplogroup I into different groups based on patterns in STR marker values (these are the "37 markers" etc. reported by genealogical DNA testing companies like Family Tree DNA, SMGF, Ancestry.com). These patterns can be found in Ken's FounderHaps.xls Excel file at his websitehttp://knordtvedt.home.bresnan.net/. If you don't use Excel, this website gives the patterns ("modals") in "Family Tree DNA order":http://dgmweb.net/genealogy/DNA/Hg-I-subclades-FTDNA-order.shtml

Although Ken was able to use his modals to distinguish several groups within haplogroup I2a, (he called the largest groups Dinaric, Sardinian, Isles and Western), most of these groups did not have a SNP to identify them. And without an SNP, many scientists, genealogy testing companies etc. did not accept these groups as proven.

But there are two new SNPs which showed us new things which weren't predicted by Ken: The new SNP called L233 separates Ken's old I2a*-Western group from I2a*-F and all the rest of I2a: Western and Western-Isles all test L233+, while I2a*-F and Dinaric, Sardinian, Isles and Disles all test L233-. This much was expected based on Ken's work. What wasn't expected was that a very small number people who he had placed in Western tested L233-. Closer inspection showed that they had slightly different 37 marker results from most Western, and a new group was found, which Ken called I2a*-Alpine because the few known members come from southwestern Germany, northeastern Italy, and Romania.

On my latest I2a tree shown here I am including I2a*-Alpine for the first time. You can see a previous version of the tree here:http://cullengene.blogspot.com/2009/12/tree-of-y-dna-haplogroup-i2a.html at that time we had not tested enough supposed "Westerns" and hadn't learned of the "Alpine" group yet.

As of August 26, 2010 the ISOGG tree includes all SNPs shown here, and hopefully commercial DNA testing companies like Family Tree DNA and 23andMe will update their trees soon. You can see the most recent ISOGG tree at http://isogg.org/tree/ISOGG_HapgrpI.html , and the current offical FTDNA tree at http://www.familytreedna.com/snps-r-us.aspx, and the working draft tree of Dr. Thomas Krahn at FTDNA athttp://ytree.ftdna.com/ (use the drop-down box at top to switch between his draft tree and the 2008 YCC tree which is the oldest tree of all of these).

[this post edited August 27, 2010 to note that ISOGG has updated its tree, and to correct placement of L160 in my own tre--Bernie] 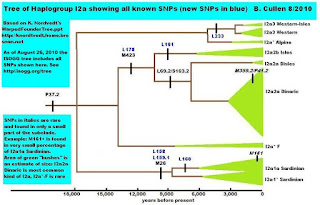 This tree shows all non-private branches in M423 (Dinaric, Dinaric cousin, Disles and Isles), and the main branches in the rest of I-P37.2.

Posted by Bernie Cullen at 2:45 PM No comments:

Email ThisBlogThis!Share to TwitterShare to FacebookShare to Pinterest
December 2013--this tree shows the state of knowledge back in December 2009, we've learned a lot since then--Bernie


I drew up this tree to explain some of the new research on haplogroup I2a, and I'm placing it here so other people can easily see it. This tree is based on Ken Nordtvedt's Warped Founder tree athttp://knordtvedt.home.bresnan.net/WarpedFounderTree.ppt
My cousin in Ireland and I belong to I2a1-"Sardinian" which gets its name from the Italian island of Sardinia where it is most common (this is just a convenient label--our ancestors probably never lived in Sardinia--some distant "cousins" probably were among the first settlers of Sardinia thousands of years ago). 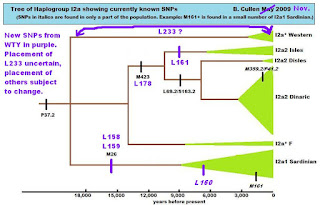 Posted by Bernie Cullen at 11:39 AM No comments: