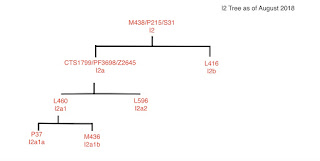 And you can compare the new tree to Eupedia's March 2017 tree as shown below (click here to go to Eupedia's I2 page). 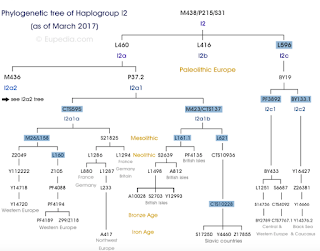 You can see on the March 2017 tree that there was a triple branch point at the earliest stage of the I2 haplogroup. But it was very likely that two of the three branches were most closely related, and now we know that the I-L460 haplogroup and the I-L596 haplogroup share CTS1799/PF3698/Z2645 and 11 other SNPs that aren't found in the I-L416 haplogroup. See the latest ISOGG tree for more details (click here).

The I-L416 results do not appear on the YFull tree, and YFull tree doesn't show this new level. But the FTDNA haplotree has been updated, see below (I don't know if FTDNA has a public haplotree).

The ISOGG alphanumeric style names have also been updated: I-P37 was formerly called I2a1 and now I-P37 is called I2a1a. But we don't use this naming system in our project: this blog is called I2aproject for historical reasons but we restrict this blog and our I2a Project at FTDNA to I-P37 only.

Thanks to the I-L596/I-L417 project at FTDNA for organizing the Big Ys and this update to the tree (click here to visit the project). The I-L417 group is very small and the known members have paternal ancestry from Germany, Italy, Scotland and Iran. Click here to see the colorized STR results page for the  I-L596/I-L417 project, it shows a few I-L417 men at the very bottom of the page (you will need to change the page size box at top or click to view page 2 of results).